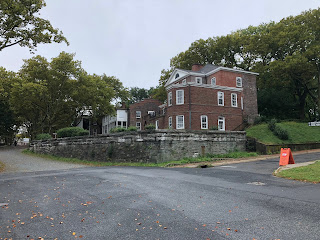 I wanted to share some photos I took last week during a quick trip to Governors Island. One treasure hunter recently sent me some theories about the island but couldn't check in person. I took the ferry out on a dreary day and walked the island for a couple hours. It used to be a Coast Guard case and the guardsmen and their families stayed on the small island. Their homes still stand as well as an abandoned movie theater and library. 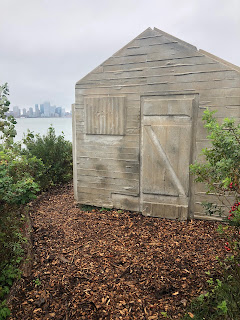 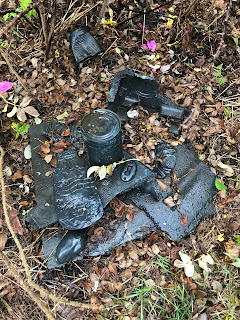 From the north end of the island you can see everything in the last painting - the onion domes, the statue of Liberty, Battery Park. You can hear the "whirring" of helicopters heading to Wall Street. A lot lines up but I was unable to find a suitable dig spot. In fact much of the north end has been landscaped in the last few years. There's a concrete cabin over there with some odd metal art on the ground behind it. 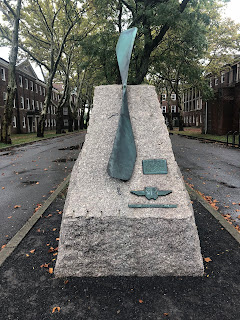 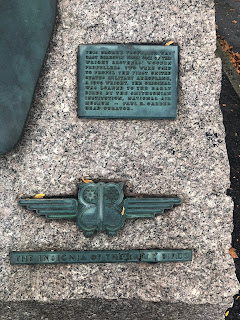 The most promising lead was this monument to the Wright Brothers, a propeller that seems to match part of the woman's dress in the painting.

What do you think? 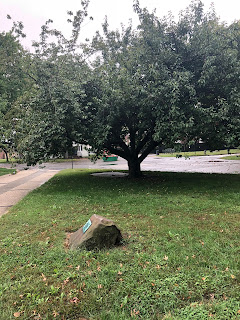 The Documentary Is Finished and Heading to Festivals!

After 4 years, my documentary, The Secret of Byron Preiss, is complete. We've already been accepted into a major documentary festival (details to come) and are submitting to many more. Hopefully we'll be screening in a town near you!

For now, check out the trailer:


Posted by James Renner at 3:08 PM No comments:

The Secret Featured on Expedition Uknown

I had a blast adventuring with Josh Gates and the crew of Expedition Unknown in Milwaukee in hopes of finding the key Byron buried there 37 years ago. If you missed the episode, it is now available to purchase on YouTube.
Posted by James Renner at 2:28 PM 3 comments:

Posted by James Renner at 2:23 PM No comments:

ABC13 News Features The Secret and the Houston Key!

Posted by James Renner at 7:12 AM No comments: 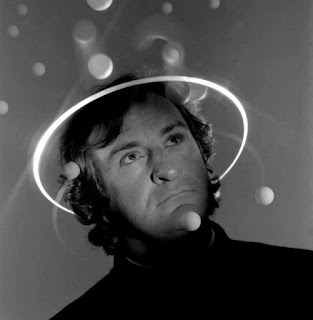 So this is kind of cool. A Redditor found a fax sent from Douglas Adams' to Byron Preiss in a copy of The Hitchhiker's Guide to the Galaxy. Apparently Byron edited a version of the book. I wonder if it was the version I fell in love with when I was a teen.

Fax from Douglas Adams to US editor Byron Preiss
Monday, January 13th, 1992, 5:26pm
Dear Byron,
Thanks for the script of the novel… I’ll respond as quickly and briefly as possible.

One general point. A thing I have had said to me over and over again whenever I’ve done public appearances and readings and so on in the States is this: Please don’t let anyone Americanise it! We like it the way it is!

There are some changes in the script that simply don’t make sense. Arthur Dent is English, the setting is England, and has been in every single manifestation of HHGG ever. The ‘Horse and Groom' pub that Arthur and Ford go to is an English pub, the ‘pounds’ they pay with are English (but make it twenty pounds rather than five – inflation). So why suddenly ‘Newark’ instead of ‘Rickmansworth’? And ‘Bloomingdales’ instead of ‘Marks & Spencer’? The fact that Rickmansworth is not within the continental United States doesn’t mean that it doesn’t exist! American audiences do not need to feel disturbed by the notion that places do exist outside the US or that people might suddenly refer to them in works of fiction. You wouldn’t, presumably, replace Ursa Minor Beta with ‘Des Moines’. There is no Bloomingdales in England, and Bloomingdales is not a generic term for large department stores. If you feel that referring to ‘Marks & Spencer’ might seriously freak out Americans because they haven’t heard of it… we could either put warning stickers on the label (‘The text of this book contains references to places and institutions outside the continental United States and may cause offence to people who haven’t heard of them’) or you could, I suppose, put ‘Harrods’, which most people will have heard of. Or we could even take the appalling risk of just recklessly mentioning things that people won’t have heard of and see if they survive the experience. They probably will – when people are born they haven’t heard or anything or anywhere, but seem to get through the first years of their lives without ill-effects.

Another point is something I’m less concerned about, but which I thought I’d mention and then leave to your judgement. You’ve replaced the joke about digital watches with a reference to ‘cellular phones’ instead. Obviously, I understand that this is an attempt to update the joke, but there are two points to raise in defence of the original. One is that it’s a very, very well known line in Hitch Hiker, and one that is constantly quoted back at me on both sides of the Atlantic, but the other is that there is something inherently ridiculous about digital watches, and not about cellular phones. Now this is obviously a matter of opinion, but I think it’s worth explaining. Digital watches came along at a time that, in other areas, we were trying to find ways of translating purely numeric data into graphic form so that the information leapt easily to the eye. For instance, we noticed that pie charts and bar graphs often told us more about the relationships between things than tables of numbers did. So we worked hard to make our computers capable of translating numbers into graphic displays. At the same time, we each had the world’s most perfect pie chart machines strapped to our wrists, which we could read at a glance, and we suddenly got terribly excited at the idea of translating them back into numeric data, simply because we suddenly had the technology to do it… so digital watches were mere technological toys rather than significant improvements on anything that went before. I don’t happen to think that that’s true of cellular comms technology. So that’s why I think that digital watches (which people still do wear) are inherently ridiculous, whereas cell phones are steps along the way to more universal communications. They may seem clumsy and old-fashioned in twenty years time because they will have been replaced by far more sophisticated pieces of technology that can do the job better, but they will not, I think, seem inherently ridiculous.

One other thing. I’d rather have characters say ‘What do you mean?’ rather than ‘Whadd’ya mean?’ which I would never, ever write myself, even if you held me down on a table and threatened me with hot skewers.

Otherwise it looks pretty good […].
Posted by James Renner at 7:02 AM 8 comments: 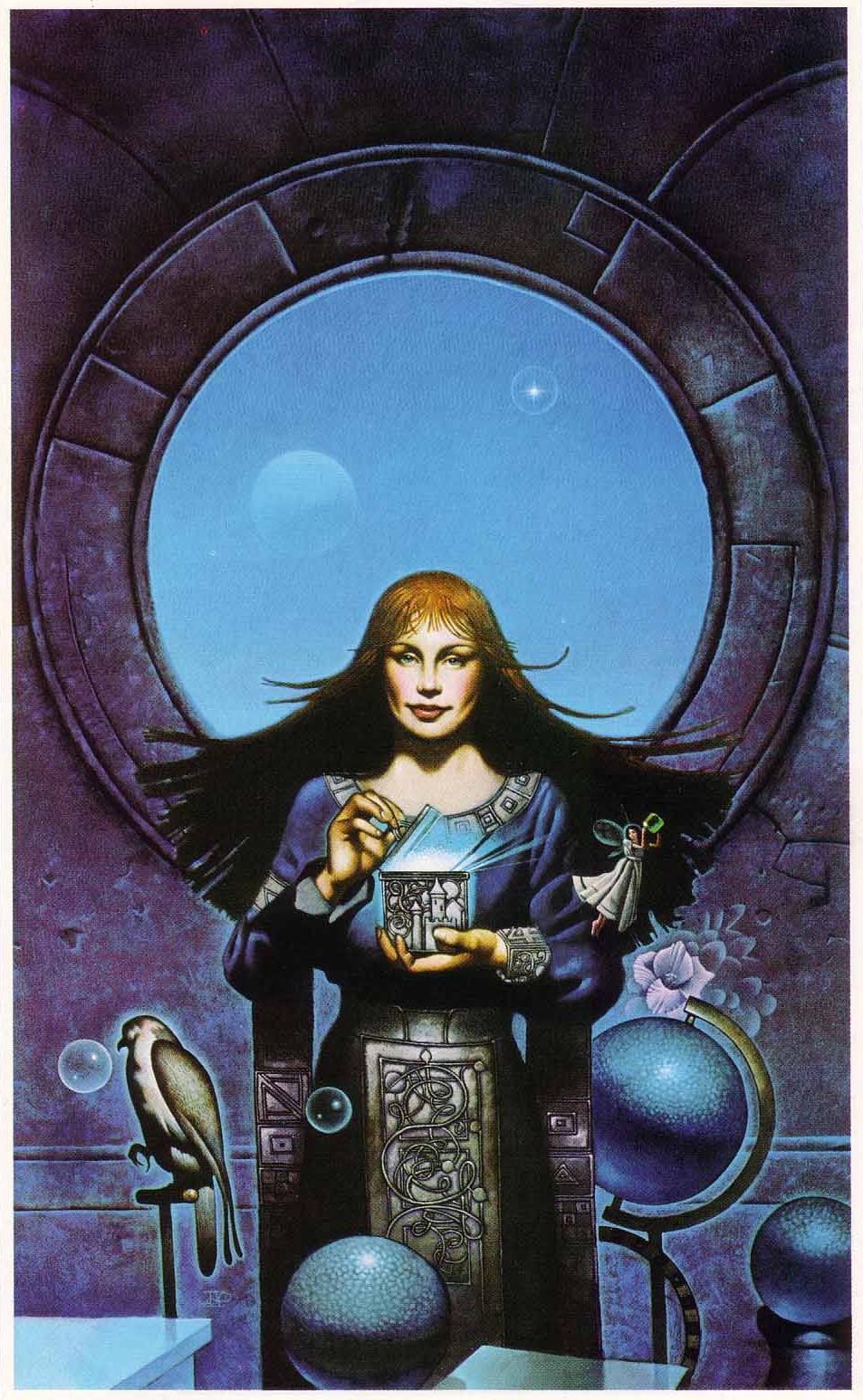 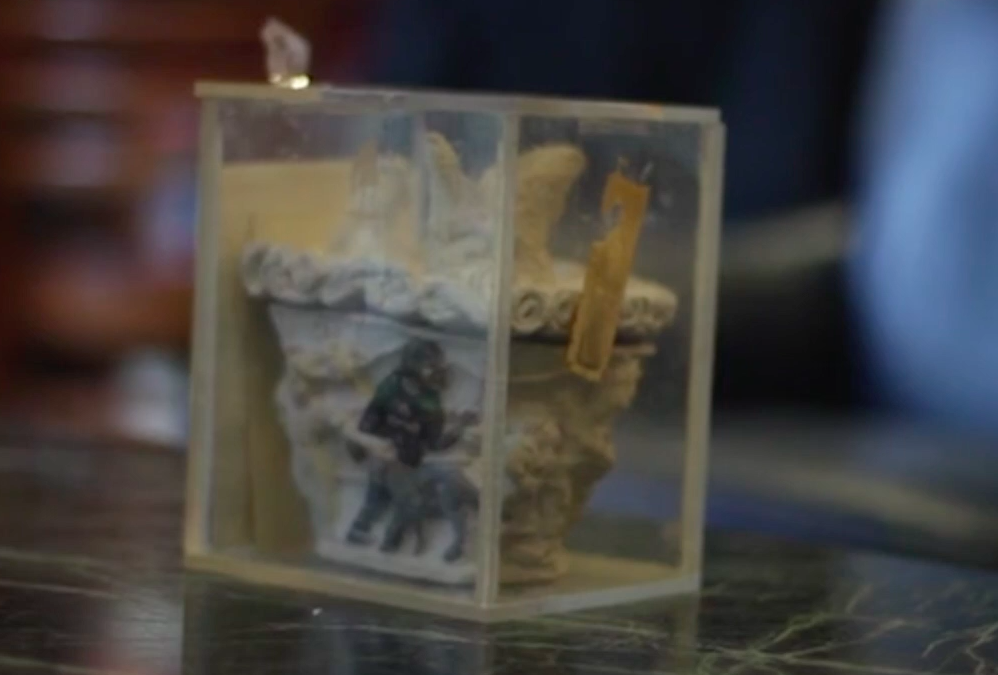 A Kindle version of The Secret is available on Amazon.